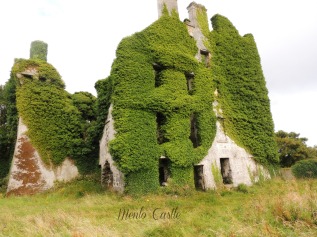 It took us two trips to Galway to find Castle Menlo. I don’t know if we’re the only ones who found this a difficult castle to find, but hopefully this can be a guide to others who may have trouble.

The first trip we asked our host where to locate the castle and were assured that it was pretty much downtown and easy to find. We followed our GPS and his instructions – and no castle. We drove around the same area many times. We did find the guard house, so we knew we were close. The guardhouse is just on the side of the road, across the street from a few homes. (Wouldn’t that be a fun place to play in as a child? You wouldn’t need to pretend there was a castle, you’d be in (part) of one!) 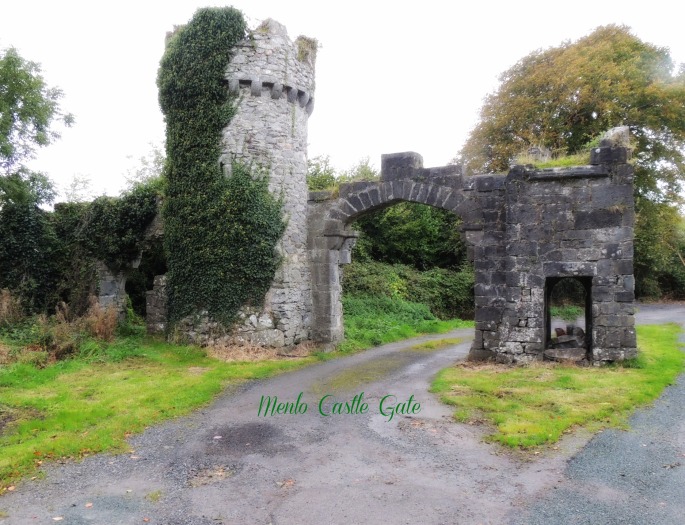 We finally stopped to ask a man walking his dog where the actual castle was. He pointed us back to the gate. Maybe that was all that was left of the castle? Another man told us the best way to see the castle was to hike through the local cemetery to the top of a hill. We drove to said cemetery. It was a beautiful cemetery, as such things go. We hiked to the top of the hill, and sure enough we saw the double towers looming above fields and trees. My husband thought he could walk there, so he climbed a fence and took off. It wasn’t long before he returned, soaked, to report that the ground may look level, however, it was not. Rocks and bog, typical of the area. Not totally daunted we tried again. Following the GPS carefully and slowly…we ended up back at the gate house. We walked around, took pictures and went down all the little paths. The road ended at a big metal gate. To the left, was a road that was blocked off. To the right were huge boulders, rubble from the castle itself. But no looming towers or picturesque castle.

On our next trip we told our daughter and son-in-law that we were going to find the castle, no matter what! Again we asked our host. Oh, yes, that’s easy. Right by the university, on the river.

Ok. We followed our GPS again – right to the gatehouse. Same dead end road. We got out and hiked around, looking for some path, a sign of some sort, anything to show us the way. Nothing.

Then a hiker climbed over the metal fence at the end of the road. She assured us that all you have to do is climb the fence, hike a bit and there was the castle. How embarrassing. It was right there all along. No wonder everyone was puzzled because we couldn’t find it.

So, that is what we did. Now, the gate is about 5′ tall, but even for me it was doable. Ok, I had help. But I made it. And there was the castle, nestled near the river Corrib. Rowers were gliding by, swans were floating near the shore, the rain had stopped – and we had found our missing castle.

As to its history: it belonged to the Blake family from 1600-1910. Of course it underwent some changes over the centuries. The castle caught fire in 1910 and was destroyed. Later it was gutted and left abandoned. It is now an ivy covered place you can wander around and take pictures. There were actually some campers staying the night in the field next to the castle.

So, climb those gates and fences, walk through the fields, hike the ridge; you never know what awaits you when you do.

One thought on “Finding Castle Menlo”