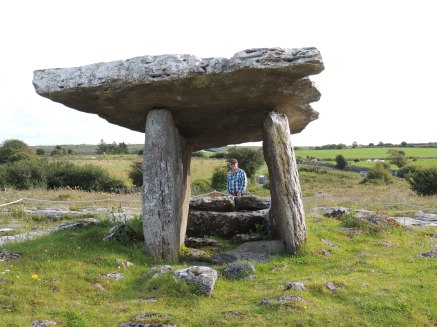 What is a Dolmen? It is a portal tomb where many people are laid to rest, along with some belongings. In ancient times it would have been covered with dirt, the entrance was below the capstone.

This Dolmen is in Co. Clare, in an area known as The Burren. There is a tangible sense of ancientness in The Burren, and with good reason – there are about 90 tombs and over 500 stoneforts or buildings. Interestingly, many of these are in farmer’s fields and you will need to climb fences and hike through rocks and cows to find them.

Poulnabrone, however, is right on the side of the road with a parking lot for convenience. (There is a stonefort down the road too, but it is one that has an entrance fee and an opening and closing time.)

The first time we visited, there was a local making and selling jewelry. He was a treasure trove of knowledge and more than willing to share his knowledge. It was October; he said in the summer he dressed up as a druid and told tales. I was looking forward to seeing him when we revisited in August, but, alas, he was not there.

There is not an entrance fee and you are welcome to wander around, though there is a rope around the Dolmen to protect it. The wandering is somewhat treacherous because of the huge, uneven limestone covering the ground.

According to the plaques located at the site, Poulnabrone Dolmen dates to about 3,000 BC. In doing repairs they discovered the remains of thirty three people; adults and children. It looks like (and this is for all of Dolmens in Ireland) that people died in other places and their remains were later to the portal.

Since a portal is a gateway, I imagine that the belief would be to bring your dead so that they can enter the next life. Maybe they had a sacred ceremony at certain times of the year, bringing their loved one’s remains to be buried on sacred ground. Perhaps a druid oversaw the ceremony. I can envision family members going to the portal to commune with those who passed on also, seeking advise or blessings. Though I’m not sure I’d like to carry a family members bones with me…did they bury them, then dig them up? Or have a special place where they bodies decomposed, then gather them? Was it an event where tribes from all over came or was it a single tribe or even family?

What are your thoughts? I’d love some more speculation!